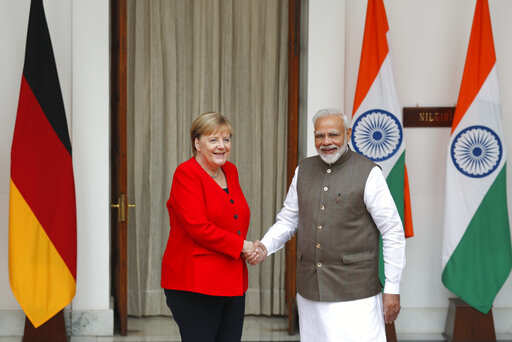 NEW DELHI: India and Germany on Friday agreed to provide financial support to climate initiatives aimed at reducing greenhouse gas emissions, with the latter expressing its readiness to provide one billion euros to India for green urban mobility.

The two countries signed a joint declaration on the matter after Prime Minister Narendra Modi met German Chancellor Angela Merkel, who was on a two-day visit to the country for the 5th Indo-German Inter-Governmental Consultations to strengthen bilateral ties.

Both leaders expressed grave concern about the currently inadequate global level of climate action and called on all countries to step up their efforts.

A joint statement issued after the meeting said both the countries concurred that providing low-carbon and sustainable mobility solutions that serve the needs of all citizens is a key challenge for both emerging and industrialised economies.

"Both sides agreed to foster cooperation on low-carbon mobility solutions and welcomed the signing of the new Joint Declaration of Intent on the Indo-German Partnership on Green Urban Mobility wherein the German side expressed its readiness to provide additional finance of 1 billion euros to support improvements of green urban mobility infrastructure and services and strengthen capacities of national, state and local institutions to design and implement sustainable, inclusive and smart mobility solutions in Indian cities," it said.

The countries also agreed to dedicate a part of the 35 million euros under the framework of the bilateral call of the International Climate Initiative to grid expansion and storage systems for renewable energy and a part to forest landscape restoration.

"New models for forest landscape restoration can contribute to India's goal to attain 33 per cent forest cover. Both sides highlighted that forests are indispensable to safeguard the climate, to protect biological diversity and to contribute to sustainable development," the statement said. Modi and Merkel, during their meeting, acknowledged their joint responsibility for the protection of the planet and mitigating climate change through enhanced promotion of renewable energy and increasing energy efficiency and at the same time reducing their carbon footprint. "For both countries, the Sustainable Development Goals and the Paris Agreement serve as guiding frameworks in their cooperation. They underlined that for a successful energy and transport transition in India and in Germany both countries need to closely cooperate, to learn from each other and to capitalize on the economic potential of climate protection," the joint statement said. Both leaders expressed grave concern about the currently inadequate global level of climate action and called on all countries to step up their efforts. "Germany and India stress the need to undertake climate actions based on the principles of equity and common but differentiated responsibilities and respective capabilities, in the light of different national circumstances and agree to work towards further developing their respective nationally determined goals (NDCs) as agreed in Paris," according to the statement. During the meet, both the countries highlighted the importance of a successful replenishment of the Green Climate Fund and encouraged developed countries and other countries in a position to do so to scale up their contributions to the Green Climate Fund over the course of its first replenishment period, in line with the provisions under the Paris Agreement and the United Nations Framework Convention on Climate Change (UNFCCC). They acknowledged the successful Indo-German Solar Partnership founded in 2015 and the cooperation on Green Energy Corridors established in 2013. In order to sustain the positive developments and to achieve the ambitious targets of the Indian government to provide 175 GW power from renewable energy until 2022 and 450 GW in later years and of the German Government to provide 80 per cent of total power generation from renewable energy by 2050?, both leaders agreed to promote a climate-friendly development of the Indian and German power markets, the statement said. India also welcomed Germany's keenness to join the International Solar Alliance (ISA), with a view to promote sustainable, climate friendly and efficient energy solutions internationally. In February this year, the Indian government had collaborated with Germany to combat air pollution and exchanged a joint declaration for the implementation of India's National Clean Air Programme (NCAP). The Federal Environment Minister from Germany, Svenja Schulze, had then said progress and implementation of Agenda 2030 was slow and the window of opportunity for a low-carbon economy was dwindling. "A lot has been achieved in recent years but the global carbon emission is still rising. The 2030 Agenda of the UN needs to be taken seriously by the government. The forum needs to build on experience exchange and cooperation will be strengthened in the areas of marine litter, waste to energy, biodiversity, waste and water," she had said.