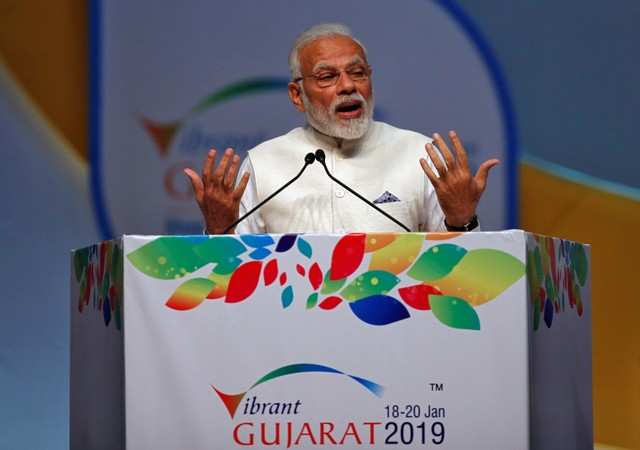 Gandhinagar: Widening the source base for the nuclear fuel, the government Friday entered into a long- term contract with Uzbekistan for supplying uranium ore concentrates.

The contract was signed in the presence of Prime Minister Narendra Modi and Uzbekistan President Shavkat Mirziyoyev, who are here for the three-day Vibrant Gujarat summit that began Friday. The two leaders held a bilateral meeting as well.

Modi also had separate bilateral meetings with his counterparts in Denmark, The Czech Republic and Malta. "The department of atomic energy (DAE) and Novoi Minerals & Metallurgical Company of Uzbekistan today exchanged contracts for long-term supply of uranium ore concentrates," foreign ministry said in a statement without offering more details.

The contracts were exchanged by DEA secretary KN Vyas and Uzbekistan deputy minister of economy and industry Sohib Saifzazarov, the statement added.

Meanwhile, the Exim Bank signed an agreement with Uzbekistan to extend a USD 200-million line of credit for financing housing and social infrastructure projects in the former Soviet republic, it said, adding the credit line was announced by Modi during the official visit of Mirziyoyev last October to New Delhi.

Mirziyoyev said he was keen on attracting Indian capital in areas like IT, education, pharma, healthcare, agri business and tourism.

According to the World Nuclear Association, the body that represents the global nuclear industry, the landlocked Central Asian country is the seventh largest exporter of uranium in the world.

New Delhi has been working on securing a stockpile of nuclear fuel for its strategic uranium reserve to sustain the nuclear reactors for the next five years so that the reactors would not stop functioning for want of fuel as had happened after the Pokhran II nuclear tests.

The US and other nations had imposed economic and technology sanctions on New Delhi following both the Pokhran nuclear tests in 1974 and 1998.

Attempts are also being made to procure uranium from Australia. A nuclear cooperation pact between the two nations was signed in 2014 and came into force in 2015.

After the Indo-US nuclear cooperation agreement, New Delhi's quest to have a uranium reserve got traction as importing fuel became much easier.

Apart from domestic production, the country imports uranium from Kazakhstan and Canada. This is primarily used to fuel its indigenously built pressurised heavy water reactors. Some uranium is also produced from Russia. Apart from that, it has agreements in place to import uranium from Namibia and Mongolia.

"Modi and Muscat and discussed the growing economic linkages between the two nations. They also agreed to enhance mutual cooperation in sectors such as renewable energy, pharma and healthcare, air connectivity and tourism," foreign ministry spokesperson Raveesh Kumar tweeted.