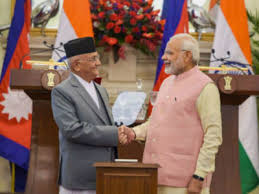 NEW DELHI: India and Nepal have decided to prepare a detailed project report (DPR) of their ambitious Pancheshwar multi-purpose dam project by December and agreed to resume fresh negotiations to resolve critical issues of water sharing and power purchase agreement under the project which was conceived over 22 years ago.

Besides generating hydro-power to the tune of 4,800 MW, augmenting irrigation potential and controlling floods, the project - a centerpiece of the February, 1996 Mahakali Treaty between the two countries - also has potential to address Delhi’s growing water demand through a proposed Sharda-Yamuna inter-linking of rivers.

“Both the countries agreed to speed up their efforts during the general body meeting (GBM) of the Pancheshwar multi-purpose project at Kathmandu, Nepal on April 27”, said an official.

Both the countries can jointly undertake the execution of the project only after finalisation of the DPR comprising all components of technical works, sharing modalities and financial details. Indian delegation to Nepal for the GBM was led by Union water resources secretary U P Singh.

Though both India and Nepal had earlier discussed draft DPR, a mutually acceptable DPR of the project is yet to be finalised. Both the countries have, so far, not agreed on the quantum of electricity which is to be sold by Nepal from its share of energy in the project to India, nor on its price.

Experts who have been following the details of the project have, however, been quite sceptical over its very concept due to what they call are the plan’s inherent weaknesses. “This project is not viable. It’ll not only be damaging from the environment point of view but also from seismic point of view”, said Himanshu Thakkar of the South Asia Network on Dams, Rivers and People (SANDRP).

Thakkar, an engineer from IIT Mumbai, told TOI, “We have written to the expert appraisal committee (EAC) of the environment ministry, giving scientific evidence of the dangers associated with it. Disaster potential of this project is very high due to possibility of reservoir induced seismicity in the earthquake prone zone.”

The project has, so far not got environmental clearance. The proposal was considered by the EAC for river valley and hydroelectric projects of the environment ministry. On the basis of its recommendations, the terms of reference for Environmental Impact assessment (EIA) studies were issued in October 2016.

Referring to various concerns including dangers associated with the project, another expert Ashok Swain even noted that the “construction of this mega-dam is not going to be easy as Indian authorities are pretending”.

Swain, professor of Peace and Conflict Research at Uppsala University, Sweden, in his article in The Third Pole - an environmental news website - said, “India should move beyond its old idea of big-dam centric water management of the shared rivers and try to actively explore cooperation over alternative smaller hydro-power possibilities in Nepal.”

He suggested that both the countries should find new ways as soon as possible to move out of the conflict trap and start to build cooperation over their shared water resources.