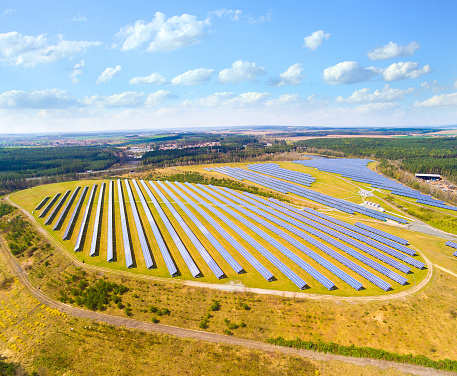 New Delhi: The renewable energy ministry on Wednesday clarified that solar energy developers can install additional direct current (DC) capacity which can be higher than the contracted alternate current (AC) capacity. Developers convert DC into AC for supplies to discoms.

"The installation of additional DC Capacity of solar PV power plants should be left to developers," Ministry of New and Renewable Energy (MNRE) said in a statement. The MNRE has issued an advisory on November 5, saying as long as the solar PV power plant is in accordance with the contracted AC capacity and meets the range of energy supply based on capacity utilisation factor (CUF) requirements, the design and installation of solar capacity on the DC side should be left to the generator/developer.

The ministry further clarified that any person is entitled to set up any capacity which he desires to set up, and sell power to any entity which may want to buy it.

"Ensuring ease of doing business for the bonafide producers / developers is of the paramount importance to the country. We are committed for providing a hassle free path to the developers of renewable energy which could help India to achieve energy security in future along with a cleaner and sustainable environment," Power and New & Renewable Energy Minister R K Singh said in the statement.

The MNRE said it has received representations from various solar developers/ solar developer Associations that recently few states have raised questions and concerns around globally adopted practice of installing additional DC capacity, over and above the nameplate / contracted AC capacity, with the objective of meeting the committed capacity utilisation factor (CUF) in PPAs / power supply agreements (PSAs).