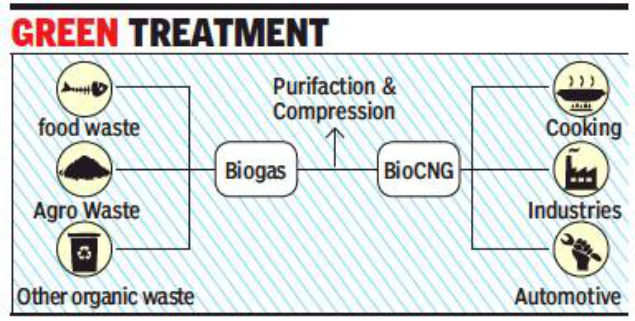 CHENNAI: Greater Chennai Corporation will bring down the quantum of organic and food waste entering its landfills by 300 tonnes by next month by setting up three bio-CNG plants that will bottle compressed natural gas produced from biowaste.

Corporation commissioner G Prakash said his office would call for tenders next week. The plants will be set up in a private-public partnership where the private company will be in charge of manufacturing and maintenance of the facility. They will be set up at Pallikaranai, Sholinganallur and the abandoned asphalt complex in Anna Nagar at ₹9.3 crore. Addressing the state assembly last month, rural and municipal administration minister S P Velumani had announced setting up of one such plant. The civic body has now decided to make it three. Corporation deputy commissioner (health) Madhusudhan Reddy said similar plants were set up at Mahindra World City. “There is another at Tirupati. The plants will be expandable to handle up to 100 tonnes in future,” he said.

The civic body processes 384 tonnes of wet waste under various projects including 33 bio-mechanisation plants. Though raw biogas cannot be used as fuel, its compressed and purified form finds use as automotive fuel. At Mahindra World City, the bio-CNG plant converts eight tonnes of food and kitchen waste into 1000 cubic metres of raw biogas. This raw bio gas is enriched to yield 400 kg of purified CNG grade fuel every day (which is equivalent to a 200kW power plant). Four tonnes of organic fertilizer is produced as a byproduct each day.

Bio-CNG can replace CNG as an automotive fuel (for CNG buses and tractors) and LPG for cooking purposes, as well as to power street lights. According to a report by Citizen Consumer and Civic Action Group’s Jeya Kumar R and Vamsi Sankar Kapilavai there are 17 operational bio-CNG plants in nine states, Maharashtra having the largest number. The combined capacity of all these plants is 46,178 kg per day.

For dry waste, the corporation has planned incinerators at Manali, Mandhavaram and Thiruvotriyur. Out of the 5,500 tonnes generated every day, 55% is wet waste. About 450 tonnes to 500 tonnes wet waste is processed through composting and 250 tonnes of dry waste is sold every day. The city corporation is also planning to convertup to15%of wetwaste generated by bulk waste generators into compost.

Satyarupa Shekhar, of Civic Action Group said the corporation should set up decentralised units close to Amma canteens, anganwadis and on roofs of restaurant where kitchens exist. “It can also be set up at the existing bio-methanisation plants where the readily generated bio-gas can be compressed and used as bio-CNG. It will reduce cost to transport food waste and bring down carbon emissions,” she said.