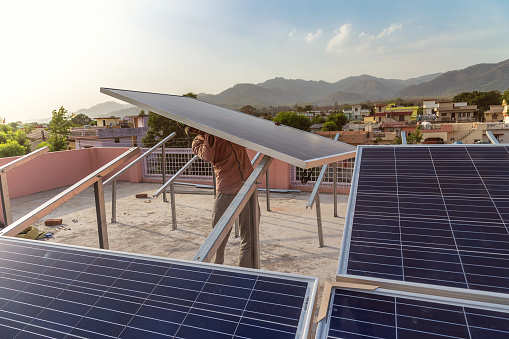 GHAZIABAD: All government and semi-government offices having an area of more than 1000 sq m will soon have to install solar photovoltaic power plant on their rooftops.

This is likely be made mandatory from this month by the Ghaziabad Development Authority (GDA) as per the order of the state government, officials said.

“The state government has asked development authorities across Uttar Pradesh to incorporate amendments made in the Uttar Pradesh Energy Conservation Building Code 2018 (UPECBC) in its bylaws. We will place the same in our board meeting on June 25,” said Ishtiyaque Ahmad, chief architect and town planner of the authority.

“Once passed, the bylaws will make it mandatory for all government and semi-government buildings having plot area of more than 1000 sq m or covered area of more than 2000 sq m to install rooftop solar photovoltaic power plant. Power generated through the solar source should meet 1% of peak power demand of such buildings,” he added.

UPECBC is aimed at making buildings energy efficient. The idea was first mooted by UP non-conventional energy development agency (UPNEDA). The UPNDA had also suggested to alter architecture of a building in such a way that it consumes less energy by way of using building materials or designing cross ventilation in such a way that natural light and air enters the building thereby reducing dependency on electrical appliances.

“The architecture part, however, will introduced in UPECBC 2018 at a later stage,” said Ahmad.